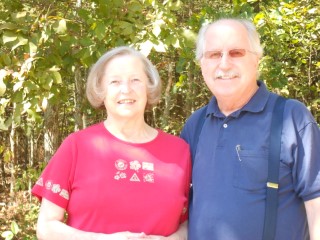 Eric grew up in St. Louis, MO, and has been interested in the paranormal and astral projection since childhood. His interest in the paranormal field heightened in 1980 with the passing of his mother and his father about 3 years later.

Gail grew up in Murphysboro, IL, and has been interested in the paranormal from a very young age also. Being an avid reader, she has read, studied, and researched the paranormal and the afterlife through hundreds of books with particular interest in the historical evolution of information on these subjects.

Eric and Gail have been married for 48 years and have continued their interest with the paranormal and with a group of other interested paranormal enthusiasts for 9 years before organizing Spirit Connection Investigations in 2011. They currently live in Branson, MO. Eric retired in 2014  after 28 years with the federal government, and Gail retired in 2017 after 34 years of self-employed bookkeeping service.

Diane grew up in Manassas, Virginia, in a house that was on part of a civil war battlefield where the Battle of Bull Run, or as some refer as the First and Second Manassas was fought. Since a very young age, she experienced several paranormal incidents, including at Gettysburg Battlefield at the age of 7 years, and has always been fascinated with the paranormal. She spent most of her early years traveling to battlefields between Pennsylvania and North Carolina to experience the energy of the wars of long ago, and has a passion for researching the history of the areas where investigations are being conducted.

Diane's investigation interests are capturing EVP's (Electronic Voice Phenomena) and using dowsing rods. Diane has known Eric and Gail and doing investigations with them for close to 18 years. Diane currently resides in Berthoud with her significant other and Golden Retriever, and works in the pharmaceutical industry working on Oncology related drugs.